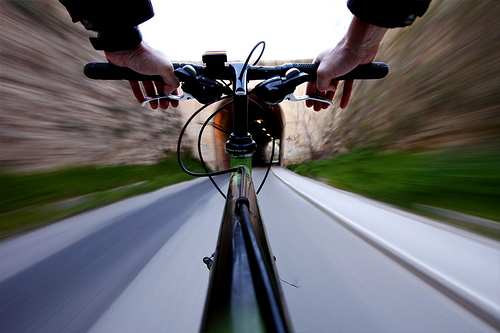 I’d like to say that as I ride my bicycle past manic drivers and clouds of CO2 everything blurs as I become one with my vehicle. In reality the only thing that keeps me focused is my inner mantra: Keep your balance, don’t topple over. A quick pause is enough to start me thinking of the small tyre width, the slight swerve that might send me flying into the windscreen of the speeding car jetting down the other lane. No, the fears of the modern cyclist cannot easily be assuaged — they keep the adrenaline at an all-time high.

I only recently bought a bicycle and it’s true that you never forget how to ride one even if it’s been decades since you’ve been on an uncomfortable saddle. As I started cycling again I realized that I am invisible! Owning a bike has its burdens and this is perhaps its heaviest one. Yes, I can cycle close to the curb but sometimes it seems I might as well be riding on it. I could, but pedestrians have an even bigger problem recognizing that cyclists have their own pavement rights too. Cycling lanes? A luxury for Cyprus that is simply non-existent. Why create a new lane when we’re only just starting to fix up our roads? It feels like cycling through a mine field avoiding those crater-like potholes.

I know the solution is simple; I can protect my brain and other body partsby wearing protective gear. This has its advantages. For starters, I know I look like the biggest dork on the planet and immediately think that there’s no way anyone could avoid spotting this knight in plastic armor on the road. It’s my saving grace — I look like such an idiot, it’s began to feel reassuring.

Riding the streets of Larnaca is a dangerous enough feat as it is, and add to that my natural gift of clumsiness and you have a recipe for a potentially serious disaster. But I combat this with carefully planned routes; I consider the quieter streets, I wear my brightest clothes and as a car brushes by I hold my breath for good luck and good measure. As I cycle vehemently through streets with no name to meet friends for coffee I know that by the time I arrive I’ll be sticky with sweat and my knee might be scraped, if not bleeding. I know I’ll lock my bike against a tree I can see while I’m sitting, and then make my bruised way towards the table waiting for my disheveled company impatiently.

It’s always nice to make an entrance, at least.

4 thoughts on “Keeping the balance”